The ‘Assurance’ and ‘Fall’ crooner made this remark about his fellow musician on Monday, June 1, 2020.

This is coming after after Rema reacted to the mannerism with which Nigerian youth protested against recent death of Uwaila and Tina. Who were killed by Rapists and Police respectively.

Uwaila was raped and killed in an RCCG Church in Edo state. While Tina was shot dead by a trigger happy police officer.

“TBH (To be honest) I feel weird fighting for my generation behind a keypad.”

According to Rema, he would rather make his voice heard through more effective means than protesting behind a keypad on social media.

Music executive Ubi Franklin lauded the young lad for such powerful utterance. He shared a screenshot of the tweet on his Instagram page and wrote;

However, Davido on seeing Rema’s post as shared by Franklin, took to his insta story to praise him .

“Way ahead of his generation” Davido wrote 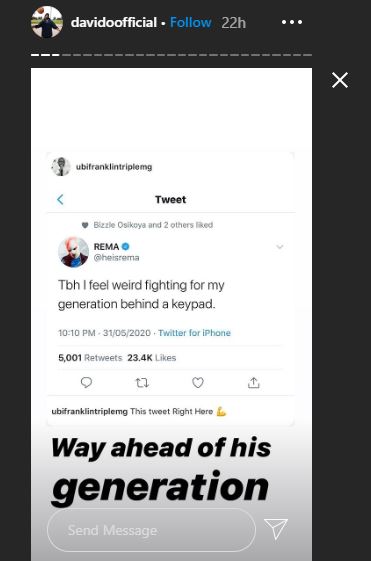